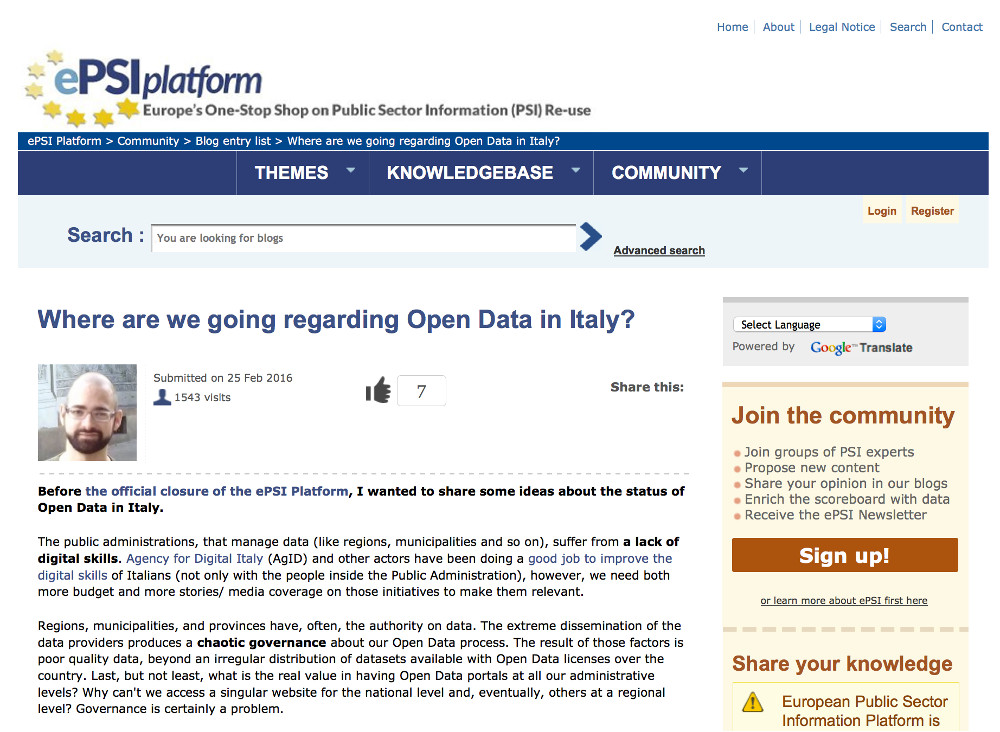 -> Where are we going regarding Open Data in Italy?

Where are we going regarding Open Data in Italy?

Before the official closure of the ePSI Platform, I wanted to share some ideas about the status of Open Data in Italy.

The public administrations, that manage data (like regions, municipalities and so on), suffer from a lack of digital skills. Agency for Digital Italy (AgID) and other actors have been doing a good job to improve the digital skills of Italians (not only with the people inside the Public Administration), however, we need both more budget and more stories/media coverage on those initiatives to make them relevant.

Regions, municipalities, and provinces have, often, the authority on data. The extreme dissemination of the data providers produces a chaotic governance about our Open Data process. The result of those factors is poor quality data, beyond an irregular distribution of datasets available with Open Data licenses over the country. Last, but not least, what is the real value in having Open Data portals at all our administrative levels? Why can’t we access a singular website for the national level and, eventually, others at a regional level? Governance is certainly a problem.

One big step forward was made last year, thanks to an amendment written by Stefano Quintarelli. This amendment modified our constitution so that the central government could decide on the governance of the overall IT process, upon all the administrative levels, including the choice of technologies and the definition of processes. (more details in Italian here)
It’s not simple, but we’re working on it while waiting for the completion of this important modification of our constitution.

In my opinion, this long-term move could represent an enabling factor to help simplify the IT governance of our country.

Meanwhile, we need stronger guidelines, both on standards and metadata, and real national coverage, based on the topic of the data. We need a roadmap to work seriously on this.
To make Open Data really an asset for businesses, we should work on having likewise and updated data, regardless of the data provider. Otherwise, Open Data is only a marketing operation useful for politicians, nor for citizens, neither for the PSI market.

As an hacktivist, I realized that the concept of reuse is very important: it’s a real value itself.
In fact, we need a better way to manage the storytelling of the reuse of Open Data across Europe. A better visibility of existing communities and best practices could be an incentive to enable real participation, especially if we consider the long-term impact.

Being a correspondent for the ePSI Platform was really nice: one of the most important aspects of the work was being able to highlight bottom-up initiatives that could help put some concrete pressure on the local government. That pressure, sometimes, really works!

For the future, I think that the initiative called “Erasmus for Open Data“ needs attention. The proposal is now named Open Data Exchange, take a look at it.
It should help the creation of the digital single market from the bottom to the top, starting with the people.

We need to identify what really is Open Data, and what isn’t.
My last advice, to enable a real Open Data infrastructure, is to communicate Open Data as digital commons useful to build upon it.
Something that can be used to enable a new kind of economy.
Greg Bloom explained this very clearly in his chapter “Towards a Community Data Commons“, published as part of “Beyond Transparency”:

If the responsibility to (re)produce knowledge about a community is shared but diffuse, and if the output of organized production is to be truly free (as in speech and beer and, yes, puppies) then we will require some kind of mechanism for collective action, through which the resources (skills, time, money, data, knowledge) necessary to build and maintain the community resource data commons can be pooled.”
[…]

This may be such a strategy: generating community resource data through the generation of a resourceful community.

It’s important to spread the idea of digital commons to better manage the storytelling applied to Open Data, as someone is already doing it (including different scenarios, like smart cities).

As we already know, Open Data is more a movement than a technology. Building something useful for profit on a commons is a step forward that solves the common misunderstanding of the word “Open”, especially in a business perspective.

We have to try to take this chance to enable a different kind of economy. It’s our turn to change the world!